How Much Does Medical Malpractice Insurance Cost? Medical malpractice insurance provides liability insurance for the risks medical professionals deal with day in and day out. Even if you have coverage offered by your employer because you work in a hospital or in a group practice that includes coverage, you should still have your own coverage. If you face a lawsuit that claims that you deviated from the standards of practice of your organization and therefore should pay compensation, malpractice insurance will encompass legal defense and possible settlement costs.

How Much Is Malpractice Insurance: The Statistics

Here are a few key statistics that affect the cost of medical malpractice:

Coverage can also affect medical malpractice insurance premiums. Doctors who want more coverage for multiple practices will pay more, as will physicians who need coverage across state lines. The malpractice insurance cost by specialty will also vary. Some specialties, such as orthopedic surgeries, are considered higher risk for insurance carriers, and premiums will reflect this.

If you work in a health profession, including nursing, chances are you’ll need malpractice insurance. This includes:

How Has the Cost of Malpractice Insurance Changed Over the Years? 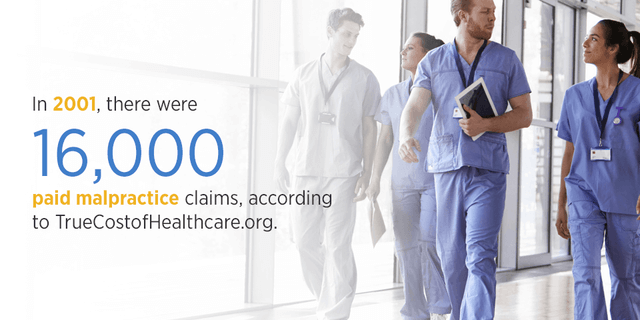 Different studies have reached different conclusions regarding the amount paid out on claims, though there's general agreement that the number of claims has gone down. A 2014 study by Brigham and Women’s Hospital in Boston found there was a decline between 2009 and 2014 in the number of claims made, though there was an increase in the amount of compensation paid out. The overall rate for claims against all doctors dropped by 55.7 percent, but the amount paid out in settlements increased by 23.3 percent, with neurosurgeons paying the most and dermatologists paying the least. The number of payments over $1M also increased.

A 2018 AMA report showed that while costs can be high depending upon specialty and location, over the last 10 years others have fluctuated greatly. In almost 75 percent of the categories requiring medical malpractice insurance, premiums stayed the same in 2017 as they were in 2016. Meanwhile, about 12 percent of other categories actually decreased from the following year.

Many factors impact how much a physician will pay in medical malpractice premiums:

1. The State Where Physicians and Healthcare Professionals Practice

A medical practitioner in the same specialty and with the same experience will pay dramatically different premiums based on location. Part of this has to do with state laws. Different states have different tort laws. States have different regulations regarding limits on policies. Those requiring higher limits will result in higher premiums.

The five states with the lowest medical malpractice costs are:

For instance, the per capita average yearly amount paid out in medical malpractice insurance claims against a New York physician was almost 15 times as much as was paid for a physician in North Dakota between 2012-2016. High payouts have been linked to high insurance costs.

Why does it cost so much more in New York? New York is one of many states that have not enacted any kind of tort reform, so there are no caps on economic or non-economic damages. As a result, medical malpractice insurance premiums are very high. Meanwhile, North Dakota has favorable tort laws and caps on non-economic damages, and if an economic damage award is over $250,000, it must undergo judicial review to determine if the award is appropriate.

2. The Physician's Field or Specialty

Malpractice premiums by specialty vary widely because some practices are higher risk. Specialties are divided and classified into no surgery specialties, minor surgery and surgery areas. Professionals in these last two areas are more likely to incur medical malpractice claims and generally see higher insurance costs. These specialties include:

The 2018 AMA report on liabilities premiums also provides a breakdown of how much malpractice insurance for physicians costs by specialty and how it differs from state to state. In obstetrics and gynecology during 2017:

For a general surgeon during that same time frame:

On the other hand, someone who works in internal medicine in these locations would pay much smaller premiums. For instance, in Orange County, premiums for internal medicine cost $8,274. In Miami, they cost $47,707 and Philadelphia $24,873.

The specialties tend to experience claims with higher severity and frequency. Orthopedic surgeons perform procedures that rely on a number of factors, including patient fitness, patient response to anesthetics and so forth. Many unexpected events can occur during such a surgery, and recovery may not be guaranteed.

If surgery on a spine results in an undesirable result, the effects on a patient can be long-ranging and severe, leading to a claim for a larger amount.

These prices can fluctuate year to year based on factors like tort reform, the stock market, the number of doctors being sued and if a state has caps on things like non-economic damages.

3. Physician’s History With Claims and Losses

Most insurers will offer better premiums for physicians with no claims made against them, simply because such professionals present a lower claims risk. Physicians who have not had any claims against them in the past ten years will get the best rates. Those who have had multiple claims in that same period will pay more and may even find it challenging to get an insurance policy.

Insurance providers in the same location will offer very different quotes, depending on their business model, overhead, application procedure and other factors. Physicians can work with an insurance advisor to compare quotes from different providers. In many cases, this will yield a range of possible insurance costs and can help doctors find the most competitive rates.

5. Hours Worked by the Physician

Longer hours mean more patients seen and more treatments offered, which means a higher possibility of an unfavorable result. Very long hours can also impact effectiveness and may be linked to unforeseen results. Tired, overworked doctors may be more at risk for errors. As a result, physicians working less than 20 hours a week can typically see some reduced costs for their premiums.

When there are multiple insurance carriers vying for a market share of a state’s market, they will sometimes apply to the state Department of Insurance to file for lower premium rates to become more competitive.

There are three main categories of damages that can be awarded in a medical malpractice suit:

Not all tort reform laws have the same results. The states that have changed their tort laws changed them in different ways. For instance, some have more robust tort laws that place low caps on damages, while other states that instituted changes may still have high caps or only placed them on specific instances, such as wrongful death. States with robust tort reform laws like West Virginia, Massachusetts or New Mexico still had high per-capita medical malpractice costs while states like Minnesota, Vermont and Alabama have low medical malpractice costs, even though they have never enacted tort reform. Alabama did pass some reforms, but the Alabama Supreme Court ruled that the changes were unconstitutional. The state still has a $1M cap on wrongful death suits.

Policy limits refer to the maximum amount an insurer will pay in the event of a claim. In medical malpractice insurance, the limit is split. For example, a $1,000,000/$3,000,000 limit will pay a maximum of $1M per claim and up to $3M for all claims during the policy term. The higher the policy limit, the more protection it offers and the larger the premiums.

True insurance companies carry higher premiums but also offer greater financial stability and more robust policy provisions. Insurance trusts offer lower premiums but less financial stability and more limited policies. Both have a vital role to play in the medical malpractice marketplace, but the choice physicians make when selecting an insurance provider can have an impact on the premiums they pay.

Defensive medicine has been one reaction in the medical community to increasing numbers of medical malpractice claims. A 2010 survey by Gallup found that 73 percent of physicians surveyed said they practice defensive medicine.

On the surface, this added diligence seems as though it should reduce malpractice claims by helping physicians notice and address any health concerns. However, defensive medicine can increase premiums. More medical treatment can mean more hours worked, which can mean larger premiums. In addition, each treatment or surgery can potentially increase risks, which can lead to increased claims history and then to increased insurance costs.

The true cost of defensive medicine, however, is hard to pin down. While a 2010 study says that it costs about $45.6B a year, other studies argue that true defensive measures actually cost much less and defensive decisions only account for about 2.9 percent of overall healthcare spending. That report argues that while doctors may make a decision partially based on defensive medicine, there are other factors involved.

A physician who works across state lines, offers services in multiple facilities or has other unique characteristics may find their premiums affected by these factors. Each medical practitioner and facility is different, which is why such a range of insurance costs exists.

In addition to the most common factors impacting premiums, there are many potential elements that could impact future costs for medical professionals. For example, some have suggested medical reforms to reduce instances of negative medical outcomes, thus reducing the number of incidents that can lead to medical malpractice claims. Some have suggested insurance reforms to impact how often insurers can increase premium rates.

Why Do Medical Malpractice Premiums Fluctuate?

During this same time period, competition in the market led some insurers to cover very competitive rates that ultimately did not cover their losses. As a result, some left the medical malpractice practice area while others become insolvent due to these market factors.

When insurers experience losses on claims, they also increase premiums.

In addition, as healthcare groups become consolidated and become large entities in their own right, some have chosen to exit the traditional insurance market and insure themselves or seek alternatives. This can have a significant impact on the insurance market and can affect how competitive insurers remain, placing additional pressure on remaining insurers to compete for existing clients.

Many people think premiums have to do with malpractice case verdicts, but the costs physicians pay for insurance has more to do with investments. Companies invest the premiums they collect, and whether insurers make or lose money on these investments has a greater impact on premium rates.

Who Pays for Malpractice Insurance?

If you own a clinic or any healthcare entity, you are liable for the actions of your employees, and your entity may be vulnerable in case of any claim. You can also choose to require your employees maintain their own assets. If you have a solo practice, you will be able to share policy limits with entity coverage. If you are part of a healthcare group, the insureds in the group will generally have to pay insurance and the entity will also need to be covered.

Some employees, such as nurse practitioners, midwives and other professionals may need to pay an extra premium to secure individual coverage.

When looking at the average cost of medical malpractice insurance for doctors by state and other averages, consider who will pay for insurance and what the insurance will cover. An individual in a solo practice will be paying much different rates than an entity covering multiple employees. 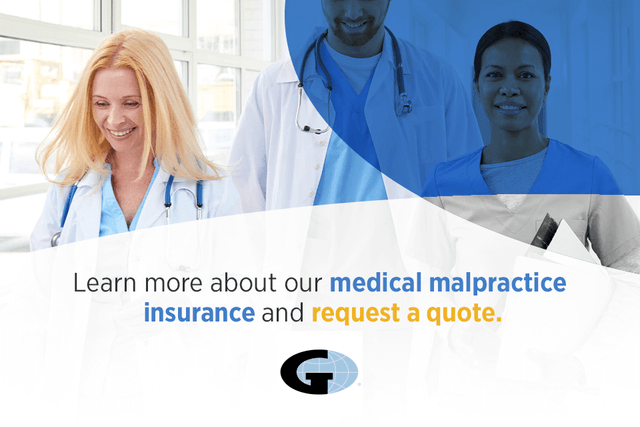 Are You Wondering About Medical Malpractice Insurance Costs?