In 2014, there were less than 8,900 paid medical malpractice claims across the US. However, while the overall number of claims has decreased since 2003, there are sill high costs involved. In 2013, for instance, $3.6 billion was spent in medical malpractice payouts, with a total of 12,142 payouts. The vast majority (93%) occurred as a result of settlement rather than court judgements. 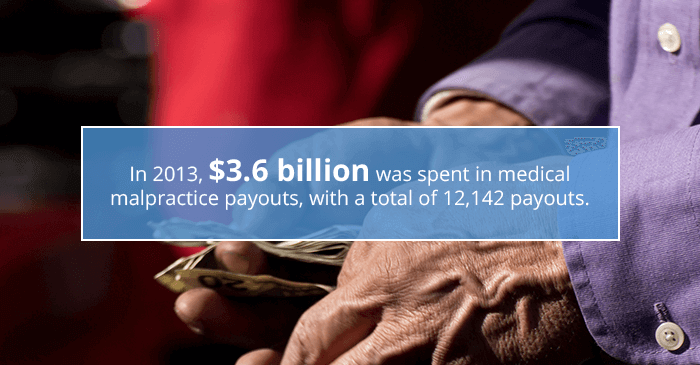 Ultimately, medical malpractice is costly to everyone. About 210,000 to 400,000 people die each year due to medical errors in hospitals across the United States. Some patients suffer serious complications or injury due to error or malpractice. For doctors, medical malpractice insurance can cost $250,000 per year, on average.

States, hospitals, attorneys and medical professional associations have many solutions for reducing medical malpractice incidents, lawsuits and high premium costs for doctors. One of the ideas that has emerged since the 1970s to address these issues is that of the patient compensation fund, or PCF.

If your professional practice is in one of the eight states with PCFs, you need to understand what PCFs are and how they can affect your malpractice insurance and the process in the event of an alleged instance of medical error.

We have compiled this handy guide to help you understand what a patient compensation fund is and how it can affect your physician insurance. If you have any specific questions, don’t hesitate to contact Gallagher Healthcare to discuss your own insurance needs as a healthcare practitioner.

What Is a Patient Compensation Fund (PCF)?

A PCF is a state-administered fund used to compensate patients and/or patients’ families for medical errors or omissions that are alleged to have occurred in the course of their treatment by a physician or entity that is participating in that fund.

In that respect, PCFs function in much the same way as standard, commercial professional liability insurance in that large populations of insureds all contribute a “surcharge” (the PCF version of policy premiums) to the fund, which then pays out to patients with valid claims. However, several key differences exist, as these funds are operated by their respective states and work in conjunction with a physician’s primary professional liability insurance policy, rather than replacing that policy. 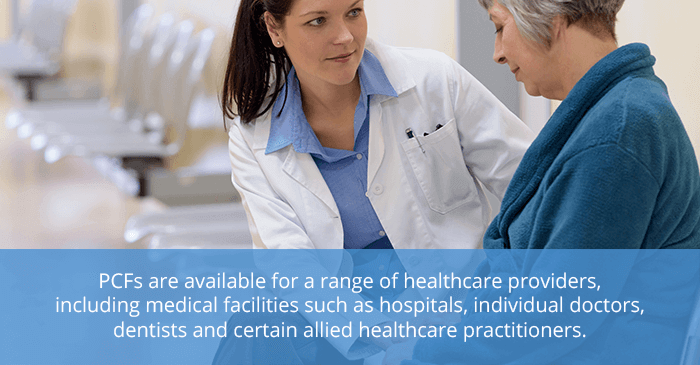 PCFs are available for a range of healthcare providers, including medical facilities such as hospitals, individual doctors, dentists and certain allied healthcare practitioners.

In most states, PCFs were first established in the 1970s. The funds were created in response to what was called a “medical malpractice crisis,” so termed because an increasing number of healthcare practitioners cited difficulty in securing medical malpractice coverage or reported prohibitively high premiums. 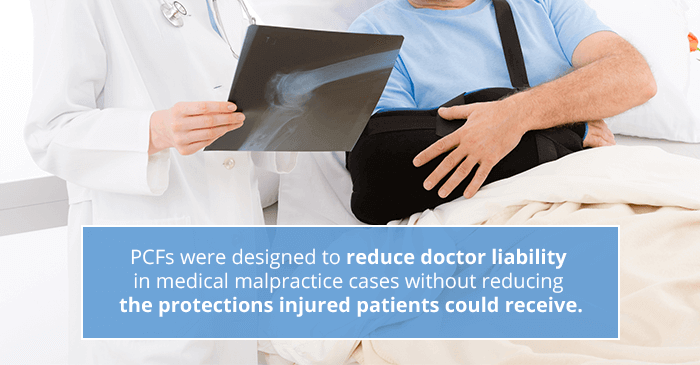 PCFs were designed to address this problem by reducing doctor liability in medical malpractice cases without reducing the protections injured patients could receive. In reducing physician liability, PCFs were created to lower costs for medical practitioners. By 1979, fifteen states had adopted the medical malpractice patient compensation funds.

How Do Patient Compensation Funds Work?

A healthcare provider is required by law to carry malpractice insurance to protect the professional or facility from lawsuits and to provide patients with protection from expenses caused by medical errors. In most states, a patient compensation fund works with this insurance. A surcharge on medical malpractice insurance premiums goes into the fund.

In the event of an alleged medical error, a patient’s case is examined. If the case is found to qualify and to be legitimate, medical malpractice will cover the injured patient’s costs to a specific limit. The rest is paid by the PCF if the doctor was participating in the PCF. In some states, such participation is mandatory. In others, it is up to the physician or medical professional to decide to join.

Which States Have Patient Compensation Funds?

In Pennsylvania, the Medical Professional Liability Catastrophe Loss Fund was established in 1975 as a type of PCF, but in 2002 its successor was introduced: The Medical Care Availability and Reduction of Error Fund (MCARE). MCARE is mandatory for physicians in the state and covers any claims beyond $500,000 against doctors. However, MCARE is evaluated regularly and will eventually be phased out as the limit of coverage for private insurers will increase. The phasing out of the PCF is partly due to the fund’s $2 billion in deficits. 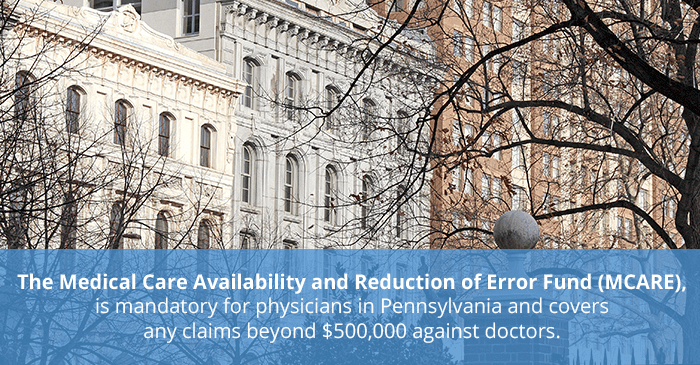 Established in 1975, the Wisconsin Patients’ Compensation Fund covers all patient costs and awards above the insurance limits of a provider’s insurance. All healthcare providers in the state must have a medical malpractice coverage of $3 million, including a limit of $1 million per claim. Claims above this amount are paid by the fund. To take part, physicians must pay an annual amount to take part in the PCF. To secure money from the fund, plaintiffs who think their suits may exceed caps on insurance must become part of the lawsuit which also includes the PCF as a party.

In 2014, Wisconsin plaintiff payouts in medical malpractice cases were among the lowest nation-wide, and the state also had the largest PCF across all states, with over a billion dollars.

In Kansas, medical facilities such as hospitals are required to take part in the PCF, known as the Health Care Stabilization Fund. Private insurance companies are the ones who gather the surcharges from hospitals and other participants and submit the money to the state treasury, where the money is kept apart from the rest of the budget.

In the event of a malpractice claim, the fund pays any amounts exceeding the insurance coverage of a medical provider. In cases where the claim amount is over $300,000, the money may be paid out to injured patients in yearly installments, which include interest. 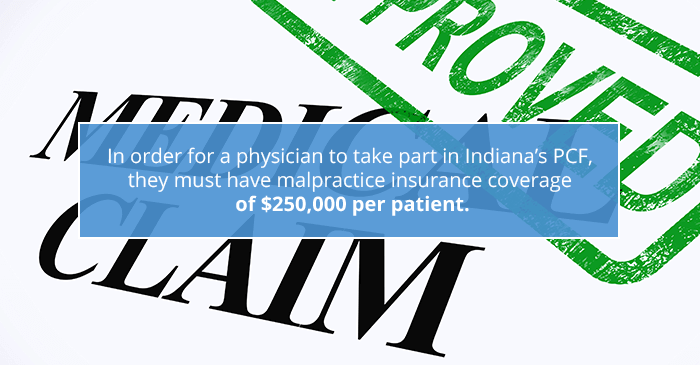 In Indiana, state law does not absolutely require physicians to maintain malpractice coverage. However, most hospitals and other places of employment do require it. In order for a physician to take part in the state’s PCF, they must have malpractice insurance coverage of $250,000 per patient.

If a patient is injured in Indiana and wishes to file a medical malpractice claim, he or she must first submit to an evaluation of their case by filing a proposed complaint before the Indiana Department of Insurance. Three physicians make up a medical review panel to look at the claim and to determine whether the claim has merit. Once the panel has conferred, the panel issues a report, and the patient can determine whether to proceed with their legal claim.

The Patient’s Compensation Fund was established in Louisiana in 1975, and most health care practitioners in the state take part by paying surcharges through their insurance. Participation is not mandatory, however. Money for the fund is kept separate from the rest of the state’s budget. In Louisiana, private insurers cover the first $100,000 of a claim through a security deposit or private insurance, and the state fund covers the rest.

In 1976, the New Mexico Medical Malpractice Act created the state’s PCF. Currently, the fund is administered by the Superintendent of Insurance and a variety of medical professionals can apply for participation, including:

Under the fund, punitive damages and medical care are not capped, but awards are capped at $600,000. Before any awards are made, medical malpractice claims are reviewed by the New Mexico Medical Review Commission. Under the laws of the state, healthcare providers who are members of the PCF cannot be sued after a three-year period has passed (unless the plaintiff is a child under the age of six).

In Nebraska, the Excess Liability Fund is available to those health care professionals who qualify under the Hospital-Medical Liability Act. Private insurance covers the first $500,000 of a claim, and the fund pays the rest. However, there is a total cap (including fund payment and private insurance coverage) of $1.75 million per claim.

All health care professionals contribute a yearly surcharge to pay for the fund, which is maintained at a minimum of $4.5 million. The surcharge demanded can be increased if the director decides more money is needed to pay all the claims made against the fund.

In South Carolina, the Patient Compensation Fund is available for qualified health care providers who join the fund by paying a yearly fee for membership. In addition, some health care providers may need to pay additional amounts, as determined by the Board of Governors. Doctors also need to carry insurance coverage of a minimum of $600,000 per aggregate or $200,000 per claim to qualify.

If a patient wants to bring about a general liability or medical malpractice claim, the patient needs to first file a notice of intent and must undergo mediation. The case itself is subject to evaluation for eligibility.

If a plaintiff is successful in their claim, the PCF will pay any awards over $100,000 per claim or $300,000 annually for participating medical professionals. The PCF is held separate from the state budget by the State Treasurer.

New York’s Excess Coverage Fund is unique because it is paid by tax dollars rather than by surcharges. Hospitals offer the coverage to physicians with hospital privileges, and hospitals are then compensated by a state fund that is designed to pay for the PCF and other health care services.

In addition to the states listed, Florida, Wyoming, and Oregon have inactive PCFs. Florida and Virginia have PCFs, but the funds apply only to claims involving malpractice in situations involving infants who have suffered specific types of injuries.

When it comes to claims of medical malpractice, a patient compensation fund can protect a physician or medical professional in a number of ways:

With a fund, insurance carriers know that awards above a certain amount will be covered by the fund, and the insurer will not be liable. This means insurance companies do not need to anticipate high awards and payouts, which means physicians can enjoy lower premiums. Medical practitioners who might struggle to find affordable coverage may be able to find it by becoming part of a fund.

Many funds also discourage frivolous lawsuits by asking patients to submit intentions to file — usually with medical evidence — and by introducing meditation to the process. Without a fund, patients may primarily be communicating with a personal injury attorney about the possibility of filing a claim — and the attorney has a financial interest in pursuing claims. Patients in a state with a PCF are mediating with a committee or panel.

Patients may get needed information about the course of events leading to an injury when undergoing mediation, for instance. This may help reduce their interest in pursuing a legal action. The committee or panel evaluating the claim is generally made up of doctors who can determine the merits of a claim. The panel also does not have a vested financial interest in having the patient pursue a claim. Therefore, resolution may occur before the case even approaches the courts, reducing claims and the liability and legal actions physicians may need to face. 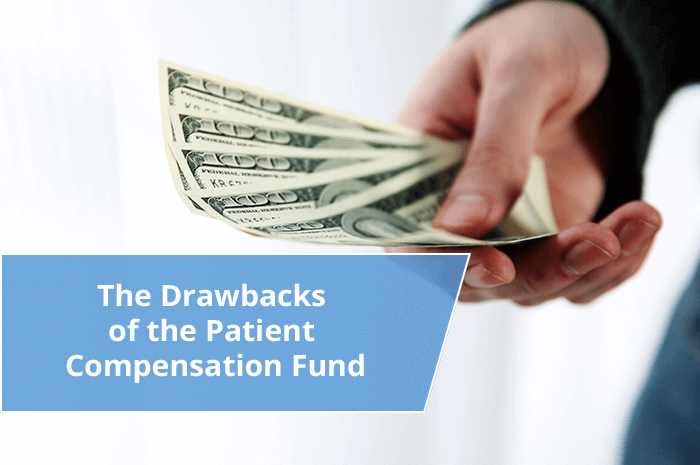 The Drawbacks of the Patient Compensation Fund

This is not to say that all experts believe PCFs are a solution for medical malpractice claims and high premium rates for doctors. Part of the criticism leveled against PCFs is that some states limit the total amount paid by the funds each year. If a patient is injured and the fund does not have enough assets to cover the amount, the patient may need to wait until money is available. In some states, larger awards are paid out over time. If a patient does not have adequate coverage due to these policies, however, they may seek other legal remedies.

Many state PCFs also require doctors to meet certain insurance coverage guidelines. In addition, most require doctors to pay surcharges — often a percentage of the insurance premiums doctors pay. These costs can be substantial and trying to ensure compliance to PCF rules can be a challenge at a busy professional practice.

State PCFs add an additional layer of complexity to a physician’s medical liability insurance program. Please reach out to your Gallagher Healthcare insurance professional for assistance in understanding and navigating the regulatory and licensure compliance requirements of practicing medicine in these states.